Sox-Astros, Dodgers-Brewers. Any combination of those four teams will make for a terrific World Series. Will it be a rematch of last year's Dodgers-Astros thriller...or a rematch of the 1916 tilt between Babe Ruth's Sox and the Brooklyn Robins (also known as Dodgers)? Or will the Brewers finally lift their first World Series trophy in their first appearance since 1982, when they were in the American League? 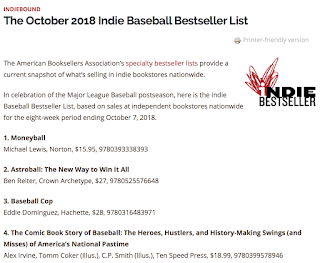 In honor of the season, the American Booksellers Association has just released its baseball bestseller list, with The Comic Book Story of Baseball making the final four. Stop by your local bookstore, or order now and you'll have it in plenty of time for the World Series. (Or plenty of time to stop wondering what you'll get that certain someone for Christmas...)