Mare Ultima, PS Publishing, 2012. The continent of Borea prospers and suffers in harmony with the authority and strength of The Fells, its greatest city. And The Fells rises and falls as the balance of power shifts between the Keep of its king, the Agate Tower of its wizards, and the Jingle of its brokers who grow fat on the trade in magic.

In The Fells live: a soldier violating the tomb of a dead sorcerer-king; a would-be regicide changed into a dog as an act of mercy; a killer of dragons (and children); a lover of a queen and of a peasant; an officer in the guard of the Keep; a traveller to the farthest northern reaches of his land; a survivor, a buyer of magic and seller of his own sword; and an amnesiac murderer whose brother was a blind jester.

They are all one man. Mare Ultima is his story.

(Also available as an eBook.)

In his three decades of running Mystery Hill, a roadside attraction where water famously flows upwards, Vietnam veteran Ken Kassarjian believes he's seen it all: conspiracy theorists who think he's a shape-shifting alien, crusading debunkers who think he's a fraud, stoned local teenagers who plague his minigolf course after hours. And as if the business of operating a tourist trap isn't weird enough, there are the strange critters running around in the woods, and the malevolent doings of the neighbours, the Boswells, Boozy by name and decidedly boozy by nature. Their latest moonshine: alien tea, anyone?

Whatever precarious equilibrium Ken might have found in his oasis of gravitational eccentricity goes out the window with the appearance of Fara Oussemitski, a physics professor with her own ideas about what makes Mystery Hill tick. When she turns up one morning with a van full of instruments, Ken starts to discover that not only is Mystery Hill stranger than he had imagined, it's stranger than he could have imagined. 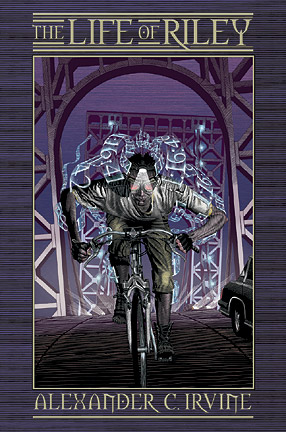 The Life of Riley, Subterranean Press, 2005 (out of print). America heading into the mid-21st century: devastated by rising oceans and natural disasters, fracturing along religious lines, puzzled and resentful of the alien Bettys who have inserted themselves into the government. Gabriel Riley fled his fundamentalist upbringing, entering the military and eventually the guard service protecting a tent city of refugees on the South Lawn of the White House.

When violence explodes in the tent city, Riley finds himself fleeing into the arms of an underground network resisting the Bettys' murky plans—from there into a splinter group that has infiltrated the resistance. His mother always told him he was the Second Coming of Christ, and the Bettys seem to be thinking along the same lines—although for much different reasons. In the end, carried along by events beyond his understanding, Riley embraces the destiny thrust upon him.

Here are the last days of Gabriel Riley, told by the three people (and one Betty) who bore witness. 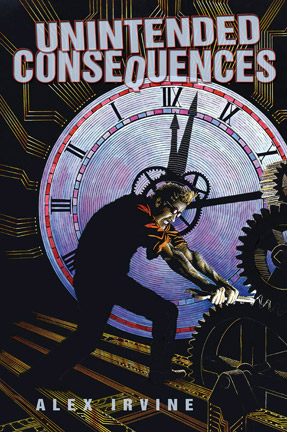 Unintended Consequences, Subterranean Press, 2003 With the publication of A Scattering of Jades, his award-winning debut novel, Alex Irvine established himself as a gifted, potentially important new voice in contemporary fantasy. Now, in his first collection of shorter work, Irvine reinforces his position, offering readers a generous collection of stories that are at once, witty, erudite, wonderfully imagined, and unfailingly entertaining.

Unintended Consequences contains 13 diverse narratives, and is bookended by a remarkable pair of novellas. “Jimmy Guang's House of Gladmech” examines the life of an entrepreneur caught up in a hauntingly familiar, near-future ethnic war from which no one escapes untouched. “A Peaceable Man,” an original novella, takes a familiar subject—a heist gone wrong—and enriches it with memorable characters and an unexpected infusion of magic. In between, Irvine presents a gallery of tales ranging from the god-haunted world of ancient Egypt (“Akhenaten”) to an entropic colonial outpost in a remote galaxy (“Elegy for a Greenwiper.”)

Among the collection's other highlights are “Rossetti Song,” a meditation on survival, loss, and the power of the past; “Chichen Itza,” in which an ancient Mayan site becomes the focal point of a new chapter in human evolution; “Tato Chip, Tato Chip, Sing Me a Song,” a comic reflection on the uses of technology and the ubiquitous appeal of junk food; and the stunning “Agent Provocateur,” which uncovers some startling connections between baseball, the processes of history, and Heisenberg's Uncertainty Principle.

Whatever his subject, Irvine remains in complete control of his often astonishing material. Individually, these 13 stories show us our world—and its possible incarnations—from a wholly unique perspective. Together, they comprise one of the most varied, memorable, and necessary collections of fiction published in recent years. (out of print) 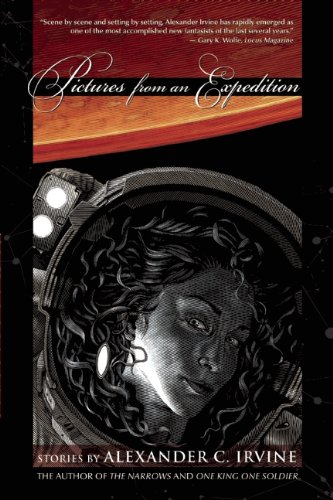 From Alexander C. Irvine, Locus Award-winning author of A Scattering of Jades, The Narrows, and One King, One Soldier, comes Pictures from an Expedition, an astonishing new collection of thirteen fascinating fantasy and science fiction stories, including the World Fantasy Award-nominated “Gus Dreams of Biting the Mailman” and the all-new tale of identity crisis and uncertainty, “Clownfish.”

With tales set in picturesque locales as varied as the New York artist’s loft in “The Lorelei,” the rural Kentucky caverns and riverbanks in “Green River Chantey,” the mystical WWII factory lines in “The Golems of Detroit,” the colonized alien worlds in “Volunteers,” and the deadly atmosphere of Neptune in “Shepherded by Galatea,” Pictures from an Expedition demonstrates Irvine’s sublime mastery of evocative detail, and stunning storytelling abilities.

Whether exploring the intersection of suburban terror and fable in “For Now It’s Eight O’Clock,” the effect of scandal and media obsession on an ill-fated Mars mission in “Pictures from an Expedition,” or dark dystopian futures in “The Uterus Garden” and “Peter Skilling,” Alexander C. Irvine’s crisp, startling, genre-bending prose makes Pictures from an Expedition a captivating, compelling read that, once started, is impossible to put down.

Rossetti Song: Four Stories, Small Beer Press, 2002. This one contains four of my earliest stories: the title piece, which was my very first professionally published story; "The Sea Wind Offers Little Relief," from the anthology Starlight 3; "Akhenaten," a science fictional take on the weirdness of that particular pharaoh and the stories about his role in the origins of monotheism; and "The Sands of Iwo Jima."